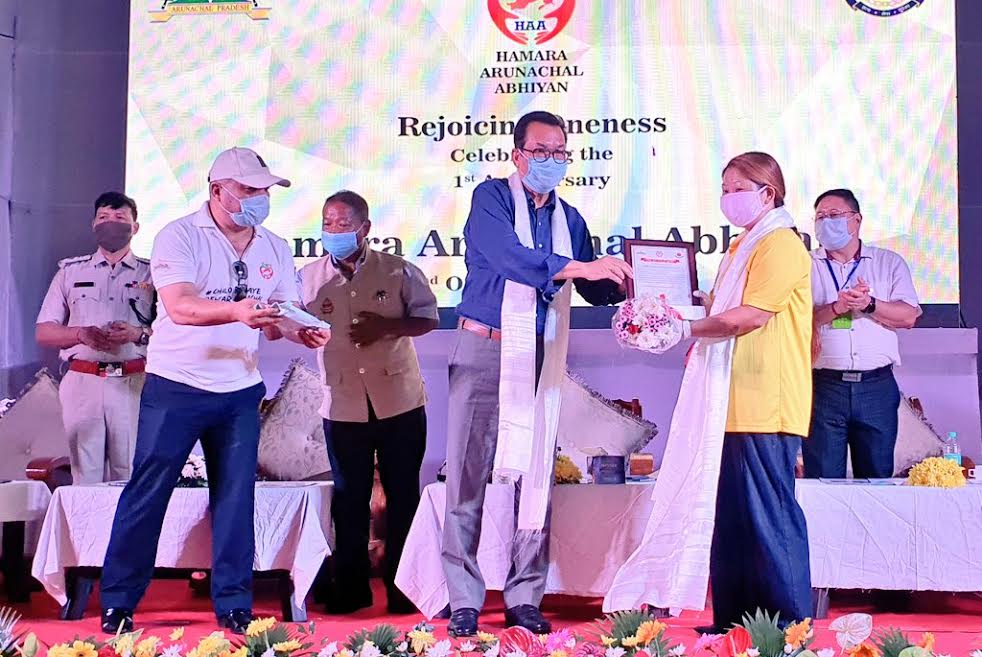 Speaking on the occasion, Mein congratulated Home Minister Bamang Felix and his team members of Hamara Arunachal Abhiyan for completing one year and lauded their effort for coming up with such initiative and effort for building a cohesive atmosphere by joining public and administration together.

He also lauded the young volunteers and wards who came forward to be a part of this movement and tried to bring a change in the mind-set of the people by promoting police-public partnership for better law and order maintenance in the State.

“The initiative taken by the youth volunteers of HAA towards cleanliness by organizing cleanliness drives in various places are praiseworthy,“ said Mein.

Mein hoped that this movement will be continued in the same zeal in the years to come and it will go a long way in promoting better coordination between communities, public and police administration and pave the way for communal harmony and peace in the State.

Mein said, “Covid 19 is going to stay with us for long and we must learn to live with it”. He said, “amid the Corona pandemic, we have to carry out our day-to-day activities like office work, agriculture and industrial works, etc in order to thrive and move on.”

“The most important lesson that the Covid-19 pandemic has taught us is to be self-reliant. We have to now start learning to use our own resources and for us our land is the biggest resource,” Mein added.

While emphasizing on Agricultural and allied activities in order to thrive over such situation and to make our State self-sufficient in food and vegetables, he urged to make optimum utilization of the vast land resources of the State for maximum production of vegetables and crops.

He said, “Arunachal has the potential to become the Fruit Bowl of India if we adopt professional methods of agriculture cultivation.”

While recalling the contribution of all the former Chief Ministers, Mein said that state has witnessed many transitional phases and every one of them has contributed for the upbringing and development of the state. It is now upon us to carry forward the legacy of development for which every individual must support and contribute for the growth of the state.

Mein said that the government under young and able leadership of Chief Minister Pema Khandu, in the past five years has focussed and prioritize all-round development and introduced various welfare schemes for inclusive growth and development of all sections of the society.

Mein, asserted that the government is focusing on transparency and is ensuring that the benefits of government schemes will reach to the last man in the society.

He said that the North-East tourism has reached new heights because of special thrust and impetus given by the Centre, with the direct indulgence of Prime Minister Narendra Modi.

Mein added that the state has huge tourism potential and with the right approach, proper management and organize, Tourism can attract lots of tourists round the year in our State.

Paying homage to the Father of Nation on his 151st birth anniversary, Mein said Gandhi was the symbol of patriotism and nationalism for every Indian. He added that Gandhi had also vigorously campaigned for Swachh Bharat.

He said that Hon’ble Prime Minister  Narendra Modi ji has taken the dream and vision of Mahatma Gandhi into a movement with a mission mode from the Rajpath in New Delhi on 2nd October, 2014.

“Today, because of his personal initiative, it has become a mass movement across the Nation,” said Mein.

Minister Home Bamang Felix highlighted the one year completion of Hamara Arunachal Abhiyan and appealed all to pledge to continue supporting and stand united to the initiative of HAA for clean, green and safe Arunachal.

Felix announced that under HAA initiative1 lakh trees will be planted in the state.

Earlier, in the morning Felix with his team of HAA along with the team of District Administration Itanagar Capital Region headed by DC Komkar Dulom participated in mass tree plantation drive at Indira Gandhi Park today. During the drive, around 150 saplings of various tree were planted.

With a motive to transform the Agriculture into a Sustainable Enterprise, Felix said that he had identified 2lakh hectare land in Itanagar capital region (ICR) to grow organic produce to support and help the farmers to be Aatmanirbhar.

Others who spoke on the occasion, included, DC KomkarDolum and SP  TummeAmo.

On the occasion, Mein gave away the award for best Performing Ward/Sector and certificate of Merit to the officials and volunteers of Hamara Arunachal Abhiyan.

Later, Mein administered pledge to maintain personal hygiene and cleanliness for there cannot be a greater tribute to the Father of Nation than Swacch Bharat, Swacch Arunachal.

The icing on the cake was the dazzling display of song Hamara Arunachal by Team member of HAA which mesmerized and left the audience spellbound.

HAA is an initiative with ‘ChaloBanayeBehtar Arunachal’ with an effort to make Arunachal Pradesh better a 360 degree campaign that targets to educate and eradicate the evils of modern society. 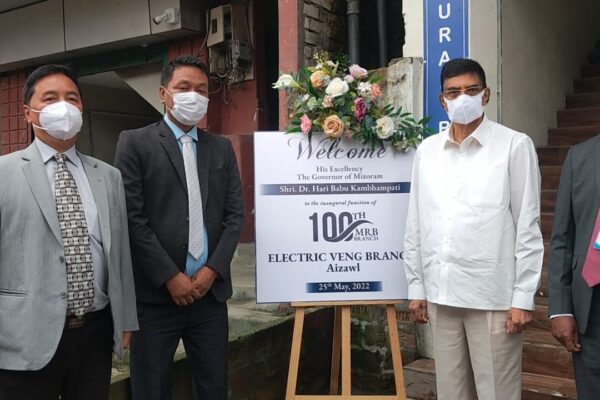 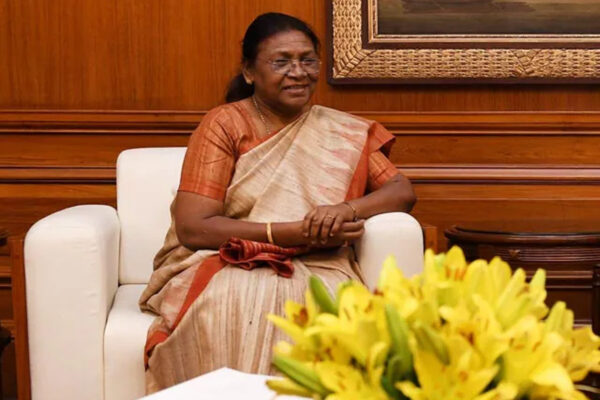 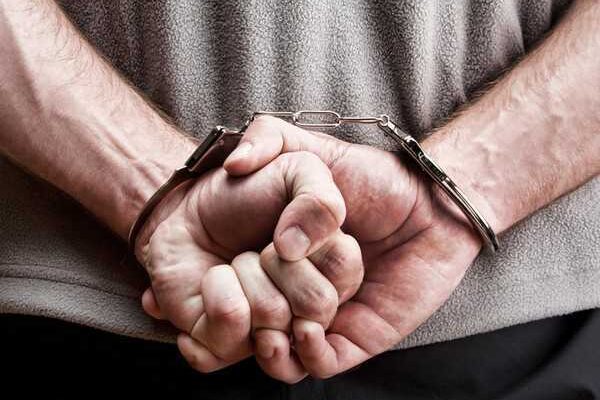 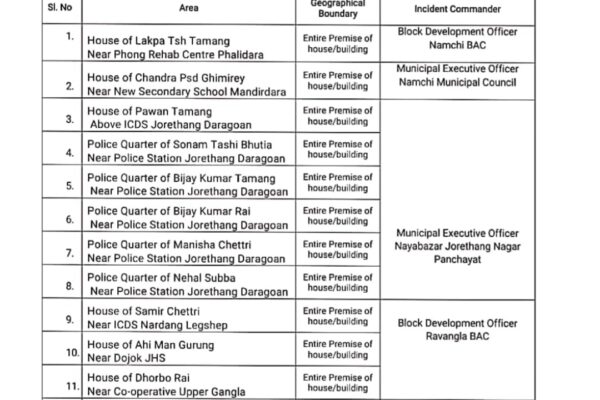 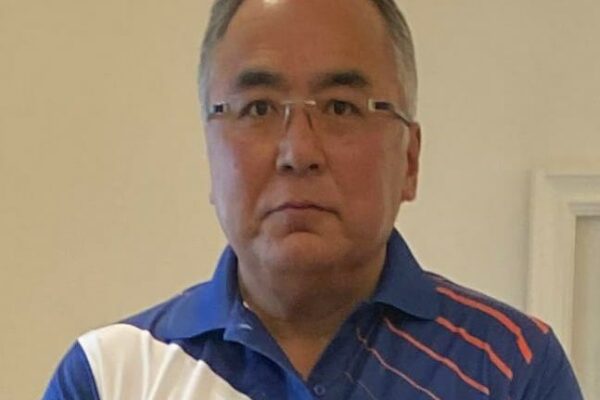